API 6D plug valve features a cylindrical or conic disc, with one or multiple horizontal hollow passageways, that can be rotated to open, close or control the flow of the fluid through the valve. The most used type is the two-port lubricated type with an open and closed position.

WHAT IS A PLUG VALVE?

This valve features a cylindrical or conic disc that controls the flow of the fluid, opening and closing the passageway between the opposite ports. The lever to control the valve is placed at the top of the body.

These valves can be used for liquids or gases such as:

A plug valve can be ordered with a flanged, hub or butt weld ends and with a cast (> inches) or a forged body material (< 2 inches diameter).

The two key reference specifications covering this type of valve, for petrochemical applications, are the API 6D (downstream) and API 6A (upstream).

Plug valves may be manually operated, with a wrench or a gear or actuated with Electric, Electro-Hydraulic, Pneumatic-Hydraulic and, Gas Over Oil Actuators.

There are four main types of plug valve, each with specific features and benefits.

A lubricated plug valve uses a lubricant to reduce the friction and seal the ports tightly. The lubricant is typically a base oil that improves the viscosity of the moving parts, like amorphous or fumed silica, which is injected between the plug face and the body seat at high pressure.

Manufacturers recommend a type of lubricant that matches the process fluid, and to reseal the valve after a certain number of cycles (or after every cycle for some applications).

Due to this maintenance requirements, lubricated valves are used in applications that have non-continuous operations. This type of valve suits processes with mildly abrasive particles suspended in the fluid such as upstream applications, gas pipelines that require bypass valves, and as blow-down valves on valve stations and kicker valves.

This type of plug device has, generally, metal seats. 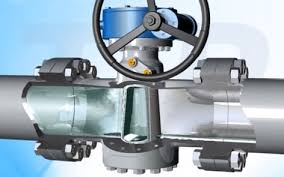 This valve features a tapered or conical disc that acts as a wedge and presses a soft-material sleeve against the body cavity (the sleeve reduces the friction between the plug mechanism and body).

Non-lubricated valves are preferred to the lubricated type when low maintenance is required, like in services for sulfur, hydrogen fluoride, or in cases where the fluids could solidify and block the valve.

The downside of non-lubricated valves is that they suit only specific applications in terms of temperature, pressure and type fo conveyed fluids (chemical resistance) due to the non-metallic seat they use.

The design of an eccentric valve features a half plug that is a key benefit for applications that require a stronger seating force and minimal friction from the open to the closed position.

The typical applications of this type of plug valve are dirty waters, sewage, sludge and slurries, air, and other similar services requiring tight shut off.

This is the most complex plug valve design, as it features multiple components that allow a mechanical expansion of the valve to give it a true double block and bleed function.

They are often used to prevent product contamination in applications that do not require double isolation.

The expanding valve uses a mechanism that rotates between the open and closed position and protects both seals from the flow path. During the rotation, the body and seals do not get in contact, and slips expand onto the body seat when the valve is closed to prevent wear or abrasion to the seals.

There are three different designs of plug valves.

This last configuration provides unrestricted flow and allows pigging operations of the pipeline. Modern plug valves are an evolution of a basic design that was developed back in the Roman empire.

Generally speaking, a plug valve and a ball valve may absolve the same function (fluid shut-off). The main differences are:

In general, plug valves are good alternatives to ball valves, even if ball valves are still considered industry standard for shut-off operations at least in the oil & gas industry.

Let us help you!

Manage Cookie Consent
We use technologies like cookies to store and/or access device information. We do this to improve browsing experience and to show personalized ads. Consenting to these technologies will allow us to process data such as browsing behavior or unique IDs on this site. Not consenting or withdrawing consent, may adversely affect certain features and functions.
Manage options Manage services Manage vendors Read more about these purposes
View preferences
{title} {title} {title}